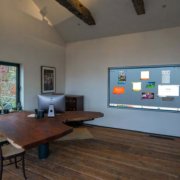 Gilmore’s Sound Advice, a premium custom integrator based in New York City, was tasked by an Upstate New York owner of an expansive property on the Hudson River’s banks that houses, among other things, a llama farm, to transform a converted barn there which serves as both his home office and yoga studio into a haven for music listening.

“This barn is his retreat,” explains Ed Gilmore, the integration firm’s principal, about the finance executive who commissioned the project. “It’s where he can stay in touch when he needs to with his worldwide offices, or have a scotch while looking at the Hudson, or he can use the yoga room as a meditation area.” One future desire he expressed to Gilmore is to have his team create “what he calls ‘a proper cinema’ in the main house.” But for now, the priority was to morph this minimalist but elegant space into the client’s dream of exquisite audio.

One of the key stipulations was that he wanted superlative music playback that was invisible to the eye. Interruption of the open space due to bulky, unsightly loudspeakers was unthinkable. His expectations were for an engaging listening experience to enjoy TIDAL and other streaming content along with an array of favorite podcasts. 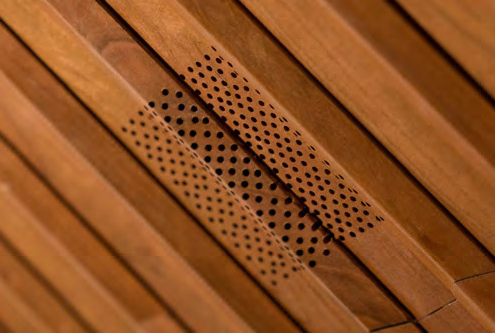 A daunting challenge was to ensure that the music reproduction would be top-notch, while keeping the entire installation as low key as possible. The solution: to hoist the equipment into the crawl space above the hallway area between the yoga area and the office. “It’s a really stealthy installation,” Gilmore said, adding that the unusual and not easily accessible positioning of the gear was one of the principal reasons he chose to use AudioControl – “because we know those amplifiers are really bullet-proof. We’re longtime dealers and have been using their multichannel amplifiers for years.”

Five sets of James Loudspeaker Small Aperture speakers, selected for the install, too, melded perfectly with the other gear, which included a Planar Touch 98-inch touch screen using T1V collaboration software, which runs off a Mac Pro computer. The speakers are behind the wooden slats. “James gave us a template for the woodworker, and he drilled all the apertures for the grilles…. It ended up being staggeringly good-sounding.

“And the system is all set up so that if he wants to add more video, he can,” said Gilmore. “He really wanted to keep the charm of the old barn intact…. It’s beautiful.”

There are three primary zones of entertainment within the renovated barn; the yoga room, the office and a sitting area. There is also music available in the steam room as well. In order to achieve the output levels, detail and balance that the client desired, the Gilmore team deployed James Loudspeaker 63SA-7HO Small Aperture architectural speakers (two pair in the office, two pair in the yoga studio and a single pair in the sitting room) and a 101SA-6 Small Aperture architectural subwoofer in each zone. The 63SA-7HO is a true full range, 3-way design with a 0.75-inch (19mm) aluminum dome tweeter, 2-inch (50mm) aluminum midrange driver and a 6.5-inch (165mm) aluminum woofer, all concentrically mounted within an aircraft-grade aluminum enclosure. Durable and designed for multi-zone audio installations, the 63SA-7HO is especially suited for critical listening while maintaining aesthetics. The point source mid/high module provides excellent off-axis response and the overload-protected hidden woofer generates bass down to 38Hz for a full-range music experience—and all from a 3-inch round or square Microperf grille.

Because this client desired audiophile quality driving bass response in this environment, a single 101SA-6 subwoofer was integrated behind the wallboard in each zone. Each sub is driven by a James Loudspeaker M1000 amp nestled in a rack within the concealed, dedicated and air-cooled equipment space next to the yoga studio. The rack also contains the networking hardware, streaming music servers and multi-channel amplifiers for the entire system.

Gilmore recalled that his team had to load the equipment rack and the Planar TV into the barn before the driveway was poured. “We carried that gear through a meadow and across soggy turf, until a farm worker rescued us with his pickup truck, in order to reach the barn,” he remembered.

The T1V collaboration software supports BYOD (bring your own device) to support the many devices, programs, and platforms of today’s meeting and learning environments. The high-tech multi-touch, multi-user screen enables the client to collaborate with teams all over the world. The Planar screen is not currently connected to the entertainment system per the client’s request; however the Gilmore team addressed such a possibility in their prewire.

“James Loudspeaker has been such a vital partner to Gilmore’s Sound Advice, providing unique and often custom solutions that deliver amazing sound where other solutions simply won’t do,” Gilmore stated. “Initially, this client was skeptical about our ability to deliver great sound invisibly, and we have exceeded his expectations to the point where he wants us to upgrade the entertainment system in his city apartment. We were able to integrate truly high-performance audio into a quiet, serene space and really please the customer as a result.”