Ed Gilmore casually bringing some shots of an install he’d done in Tribeca up on his computer monitor was a major “a-ha” moment for me. The first shot showed a stylish, obviously comfortable living area that also served as a billiards room, dining area, and kitchen. The second showed the same room transformed into a home entertainment space a lot of people would kill for. That, a completely intuitive part of me screamed, perfectly represents the new paradigm.

Others must agree with that conclusion because people just won’t leave Ed alone about that space. Ironically, even he admits it’s not perfect—but it’s getting there, as the client invests more and more in turning what was initially a whim into a room that can blow most movie theaters out of the water.

Having since visited the apartment, and shot some video there, I recently circled back around with Ed to talk about all things Tribeca.

People seem to love that installation because it says that almost any room can now be transformed into a legitimate entertainment space.

I think what we did was to, in a minimally invasive way, create a home theater experience in a room that, if you looked at it from any angle, you would immediately say it couldn’t be done there. There was just no way.

Aesthetically, the room had already been designed before you came into the picture. How were you able to navigate those waters?

We just needed to be open and try to find really unique solutions that would both satisfy a high-end level of performance as well as maintain a certain aesthetic value the client wanted us to maintain, and be true to the bones of that room. I don’t think that’s any rare talent. The issue was that he had interviewed a lot of other AV guys who told him right off the bat, “No, we won’t do that.” And that wasn’t the answer he wanted to hear. So we were lucky enough to be able to convince him that we could do it, and it could be compelling. 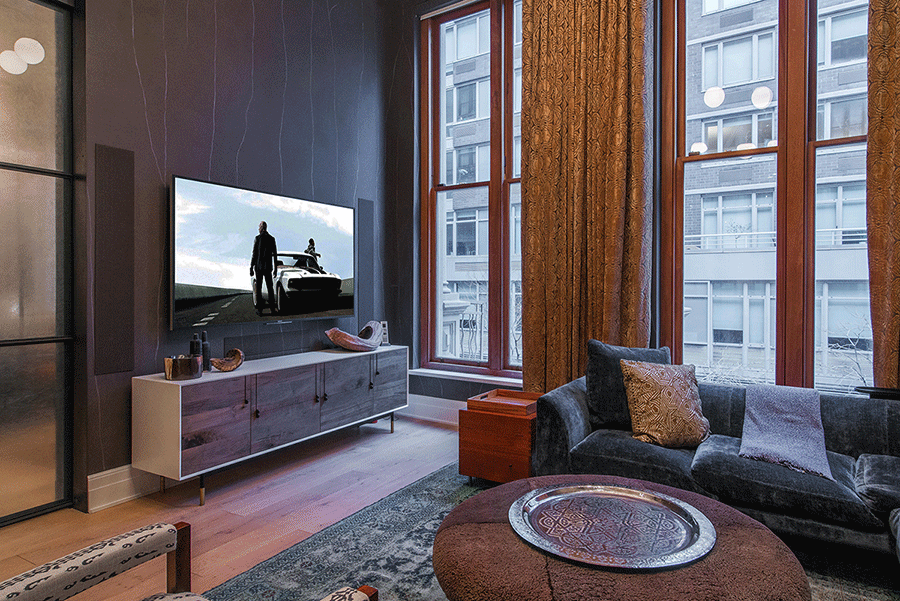 That communal area wasn’t supposed to be the main entertainment space, right?

Right. The den [shown at right] is the room where he really sits and watches most of his TV. That was the room he wanted to spend some money on. This other room was kind of an experiment for him.

Are people fascinated by that room because it’s a kind of outlier or because it represents a trend?

I think it’s a little bit of both. It’s tapping into a trend, that trend being that people aren’t interested in having dedicated rooms for specific purposes like a theater, or even a dedicated music room.


The promotional media-room tour I produced of the Tribeca space.

There’s an aspirational aspect to it as well. It resonates with people because it’s well done. I mean, it’s a really beautiful space. And it’s well thought out. And that goes back to the developer, who did a really nice job on that building. The dimensions of the room are great, and it has this wonderful warm feeling to it without really needing much in terms of other types of interior design.

But these particular clients do have taste, and they’ve been around the block a few times in terms of renovations. He is a serial renovator. And so their choice of artwork, their choice of furnishings—those little details that they have there are great. And I think that resonates with a lot of people too.

If luxury is really about details—about somebody caring enough to make sure every last thing is done right—Tribeca would seem to qualify.

I think you and I agree on this, right? Attention to detail is really what matters in a luxury space. People have asked me about what luxury is, and I typically say that it needs to be inspirational. But that doesn’t mean it really needs to be noticeable. It’s something that kind of unfolds. And by the time you realize what’s happening, you’re kind of taken by surprise by it. And it’s organic—it feels like it was always part of what was meant to be there.

In a followup post, Ed will talk more about turning problem rooms into great theaters and about the increasing importance of interior designers in home entertainment spaces.